The fire crews put sprinklers on houses to help protect them from flying embers. (Submitted photo)

George Hamm is back at work at Celgar after two weeks of 12-hour days working in the bush.

“The first few days, it’s all go, go, go,” says Hamm, the volunteer fire chief at the Ootischenia Fire Department. “We have two guys putting up sprinklers on roofs, they’re up and down the ladders. Two other guys are just rolling out hose, while the fifth guy is next door, planning the next home.”

Hamm is a member of the Regional District of Central Kootenays’ Structural Protection Unit. Members of fire halls from across the RDCK fill an important-but-unsung role in forest fire fighting — making sure people’s homes are protected and safe during forest fire emergencies.

While the water bombers, helicopters, heavy equipment and fire attack crews get the headlines every year, it’s teams like the RDCK’s SPU that work to actually protect homes and property. The Wildfire Service is quick to point out they fight forest fires, not protect structures.

That’s where Hamm’s crew comes in.

Drawing from more than a dozen fire halls across the RDCK, the SPU crew load up trailers and head into the back country, sometimes just a few kilometres from where forest fires are raging.

“Our first objective is to get water on the structures. We setup water lines, and sprinklers, and find a water source, be it a river, lake, or bladder filled with water,” says Hamm. “Then we work on FireSmarting people’s home, creating that 30-foot circle of protection around the home.

Hamm’s crew moves in where evacuation alerts or orders have been put in place. Homeowners have often abandoned everything, or are preparing to leave everything behind.

The SPU does what it can to protect these properties in imminent danger from the fires.

“Everything goes by triage. Our main thing is the structure that people live in,” he says. “Then it’s any infrastructure — solar panels, battery sheds, water pumping stations.

“Our job isn’t done until the trailer is empty. That’s the way we look at it.”

Then the crew does secondary work — putting poly up over open windows, removing flammable materials like cushions and mats from around houses, and ensuring the sprinkler systems won’t do water damage inside the homes. The crew doesn’t cut down trees however, or make any other permanent changes to the property.

“It’s almost awkward when you first arrive, people feel you are intruding on them,” says Hamm. “There’s a reason people live in these communities, they want to be away from it all. They’re off the grid.

“So you have to be very professional and courteous, give them their space, respect that they’re out there for a reason.”

“They know that you’re there to help,” he says. “They seem to open up rather quickly, when they see you’re there to do no harm, that we don’t care what we see in the yards or what happens there.”

Their arrival in a location — the latest was close to home, in the fire area north of Castlegar — is the start of a huge effort. In the crew’s most recent shift, they protected 12-15 homes in Brooklyn, and 37 structures in Renata, including the historic school house. Hamm says it’s hard work, but rewarding too.

“I love it when you get the water spraying, feel the humidity building up in the area. And if there is anybody around, they are so grateful that you are there,” he says. “It’s very gratifying. And when people thank you in the street, or when I’m walking in Safeway and they see the t-shirt, that goes straight to your heart.”

Hamm’s back at his regular job for a week — he says his employer has been very supportive of his fire-fighting activities. While the fire season’s winding down, he expects the SPU will still be needed for mop-up operations, and to make sure homes are safe.

Hamm says people should get a FireSmart assessment of their home — offered free by the RDCK — and take steps to protect themselves.

Because the SPU can’t be everywhere every fire season. 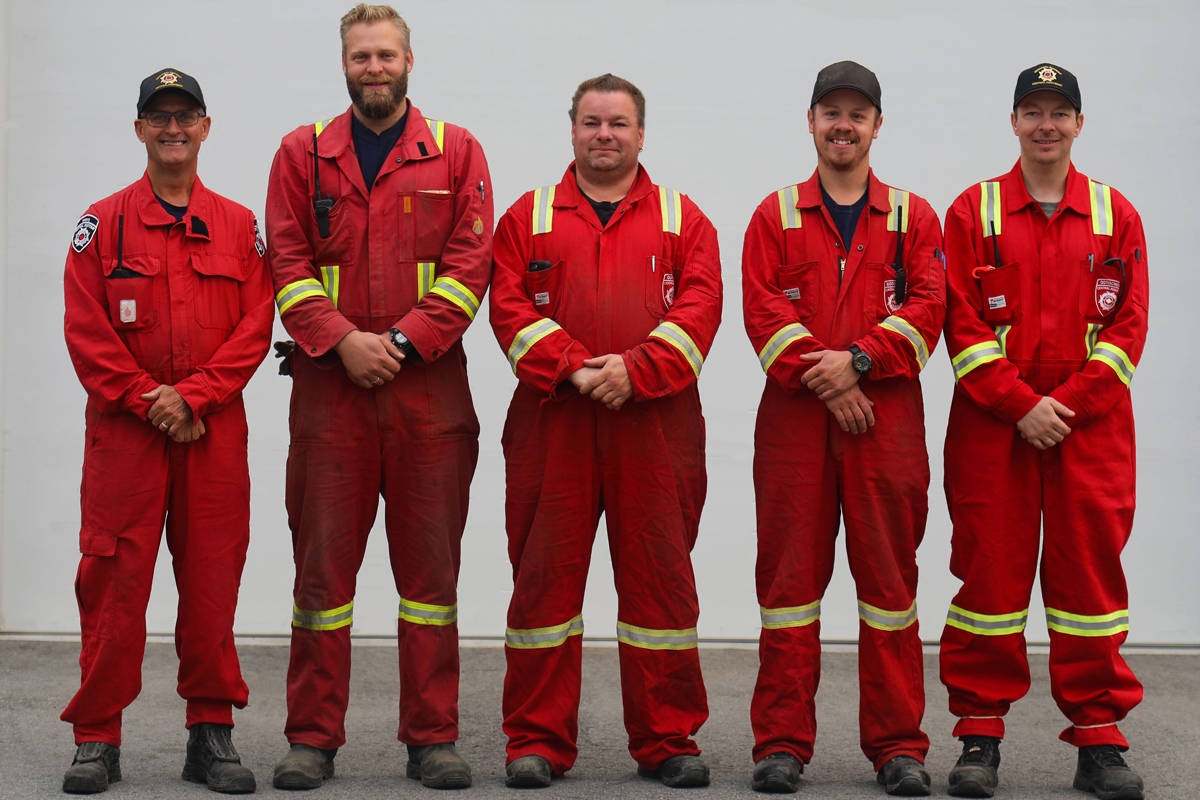 The crew moves with a mobile supply unit to help them protect properties at McCormick Creek. (Submitted photo) The crew gathers at McCormick Creek. Crews are drawn from across the RDCK so no one station is left short-staffed. (Photo submitted)