So when the Tribune visited the Tsilhqot’in community on Wednesday, which is flanked by out of control wildfires to the northeast and southeast, it was no surprise to us community members were doing well and in good spirits.

“It has pulled our community together. It has really bonded us,” said Alphonse.

When the wildfires started last Friday afternoon, Alphonse said the community decided together that they would stay and try to save their homes themselves.

“You make your decision and you stick by it,” said Alphonse, who almost came to blows with RCMP members trying to force the evacuation of the community, specifically the children, Friday night when evacuation orders came in for the area.

That conflict has since been resolved, and children in the community have stayed and been given jobs to do while anyone able and 19 years or old, are out fighting fire. Elders and those who wanted to, were evacuated Friday night while about 300 remain.

“You have your moments, like one night when I was sitting out here watching the fires [grow] I asked myself if, did I do the right thing? But my community said yes, this was what they wanted to do. They wanted to fight the fires … If we lose homes we take comfort that we’ve done everything in our power. We don’t want to sit in Williams Lake, Quesnel or Prince George and be sitting their with our fingers crossed that somebody is out there looking after our interests.”

Alphonse said he is absolutely confident that if the community had evacuated they would have already lost as many as six homes or more. In the early days of the fire, residents of the Chilcotin received little help from the government as fires around Williams Lake, 100 Mile House, Cache Creek and Ashcroft spread resources thin.

“That’s a lot. If we lost those homes we’d never get them back … we can’t afford that. We need those homes right now. We are not the richest people but whatever we have, we take pride in what we own.”

Under some scrutiny for staying inside the evacuated area, Alphonse said they have many trained fire fighters and health care providers on hand as well as a month’s worth of medication for those who need it and lots of food and water.

“This is not our first rodeo,” he said, adding this is the third fire the community has experienced since 2009 and, because of those experiences they already had strategic planning around wildfires in place.

“If you’re going to live in the Chilcotin you’d better get used to fires.”

Gathered at the band office, women are doing their part preparing meals for anyone who may need it, such as weary travellers leaving the Chilcotin, fire fighters and hydro crews, who were provided lunches by Anaham members for their efforts to restore the power quickly. The community is also still providing fuel for travellers at their gas station. Anyone needing to stop and just rest or have a meal are all welcome to do so.

“Everyone is welcome,” said Nola Alphonse, adding she’s praying they don’t get pushed out of their community by the fires.

Band members like Nola and Susan Rae Alphonse said they all are in agreement that staying home was the right thing to do, and feel confident in the ability of their members and that of the BC Wildfire Service to contain the fires.

Alphonse, who created a political firestorm when he told media that community members needed to stay and save homes because Indigenous and Northern Affairs Canada (INAC) would take years to replace any lost homes, was also paid a visit Wednesday by Catherine Lappe, regional director general for INAC, Grand Chief Ed John and Chief Bob Chamberlin, vice president for the Union of BC Indian Chiefs, Bill Wallace of the RCMP and Mike Gash of the Ministry of Aboriginal Relations and Reconciliation.

Lappe, came made her entrance via helicopter, said she made the trip to “visit the community and see how we can support them” and promised to expedite any funds needed in the event of a loss.

Before retreating to the boardroom for a meeting, Alphonse joked with Lappe that he wouldn’t let her leave until she promised new funds for a youth centre for Anaham. He also took the time to ackowledge several teenage boys who were working hard for the community.

“You give them a job and they take pride in it,” Alphonse said. “It’s the little things like that that make a difference.”

On the drive back to Williams Lake with Paul Grinder, a band councillor for Tl’entinqox t-in and fisheries officer for the Tsilhqot’in National Government, he said it’s how you handle life’s challenges that makes you who you are.

“It builds your character. It makes you stronger,” said Grinder. “I can’t see myself racing away from this. It’s too important. It’s a priority for me. Those are my people.” The Hanceville fire as seen Wednesday, VIPs arrive at the reserve Wednesday. Air support from the BS Wildefire Service work the fires out west near Anaham Reserve. Skidders sit parked at Anaham waiting to go to work while VIPs pay a visit. 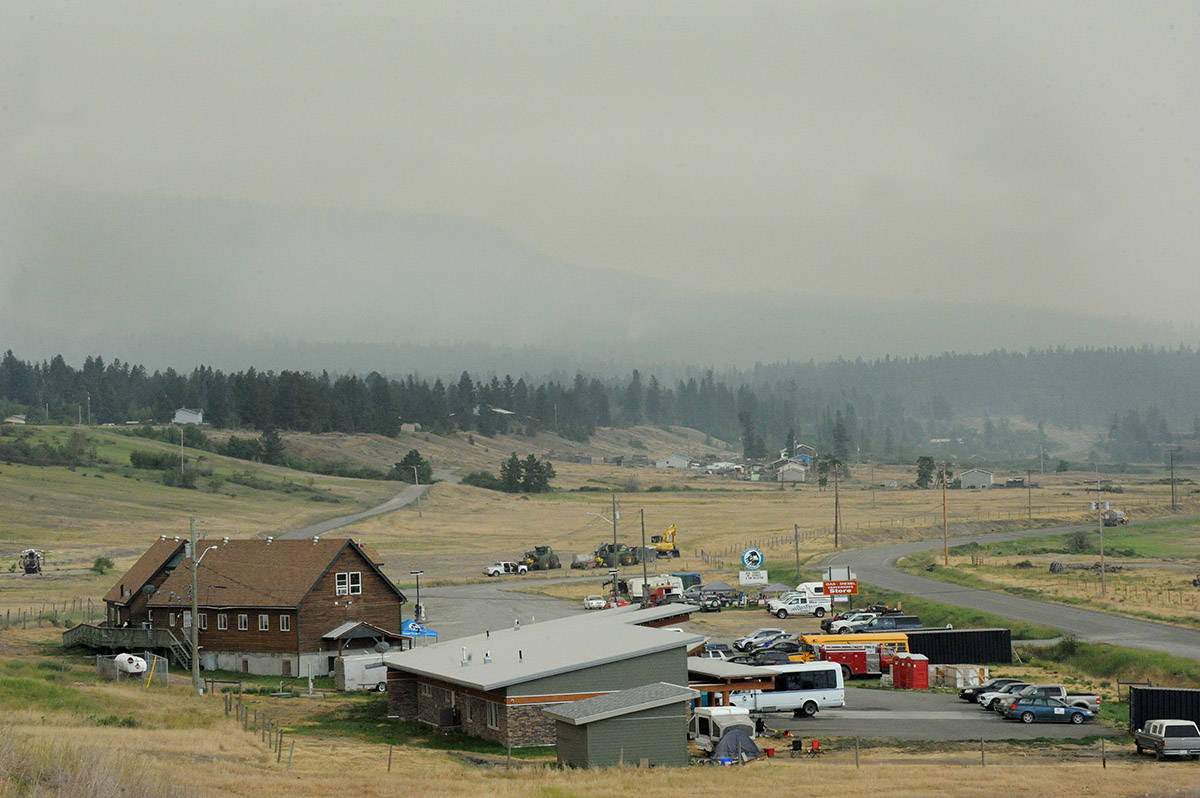 A look at the Anaham band office facing east. Helicopters bucket out of the nearby Chilcotin River. Band members and staff Paul Grinder, Shelley Bevz, Harvey Dick and Wanda Dick work for their community during the wildfires. Band members are all in agreement that staying to fight the fires was the best decision. Anaham band members Gregory Charleyboy and Ron Elkins have been working the water truck for Tl’entinqox t’in since fires broke out Friday. Preston Gilpin, 13, helps his community by unloading a water delivery.

BREAKING: Williams Lake is under evacuation